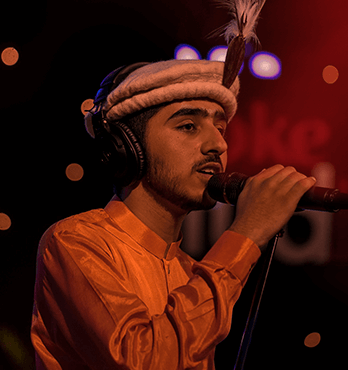 When Kashif Din walks into the studio for his first rehearsal, Coke Studio’s house band is confused for a moment. The 19-year-old has a quiet and shy presence – it is hard to place him as the well-practiced voice in the recording that the team has been rehearsing to so far. He is nervous as he enters, and his voice is soft and subdued. As he settles into the studio environment and begins to sing, his voice opens up and a maturity comes through, a controlled, gentle timbre sounding out the soft vowels of Burushaski, the language Bo Giyam is written in.

Kashif’s young talent is the product of internal fuel that has been driving him forward since he was a child. Since then, Kashif has had a thirst for musical discovery and learning.

He doesn’t remember a life without music: “Since I’ve begun to form memories, I’ve been running after music,” he says. For Kashif, toys and sports were of no interest — much more interesting to him were plastic pipes, pieces of wood, and wires that could be used to make toy instruments. Kashif’s first instruments were the flutes he would make himself, making holes in pieces of pipe by measuring the distance between them with his fingers. It was these flutes that Kashif began to learn music on, teaching himself through experimentation, taking his first steps of musical discovery.

In school, Kashif’s head was always in a cloud of melodies and rhythms, an inclination that would sometimes get him into trouble. Kashif could be heard playing beats on his desk in the middle of class, a noisiness that would earn him a reprimand. As he grew older, he would spend his classes cooking up lyrics to songs. In the first grade, he obtained his first professionally made instrument in a trade-off with a class fellow: a recorder. Once his heart was set on the instrument, Kashif set out to entice his friend into handing it over, making several offers over the course of a few days. Finally, a deal was struck: the recorder was given over in exchange for a toy gun that Kashif had made himself using wood and rubber.

Whatever Kashif taught himself on the flute showed early signs of his musical talent. Shehzad Sher, owner of Valley Beats Studio in Hunza, recalls seeing a video recording of ten-year-old Kashif playing his flute with a group of other children. In the video, while other children play folk instruments like the dadang, Kashif’s flute sings sweetly through their sounds: “The way he was leading those children was amazing to see,” remembers Shehzad.

Slowly, Kashif’s instrumental repertoire began to expand when he was bought his first piano — a small, toy piano for children. His mother bought it during a visit to Karachi, at young Kashif’s behest who, for the entirety of her month and a half away from home, waited eagerly for his instrument. The night before she was meant to return was spent in sleepless anticipation for Kashif. When he finally received his precious gift, Kashif needed only a day’s tinkering around with it to figure out how to play his first melody, a Hunzai folk song he had often heard.

So far, Kashif had learnt through observation and experimentation, not having access to reliable internet in his area, or other resources. He began seeking out teachers as he grew up, spending time with local musicians, observing them, asking questions about theory and technique. Eager and curious, Kashif found musicians along the way who were more than willing to teach him. He spent some time with Niaz Hunzai, learning the basics of classical music, but it was contemporary, western sounds that he found himself gravitating towards. Irfan Khan, a Hunzai pianist, found in Kashif an enthusiastic student and began teaching him about different genres, and basic musical theory, guiding him to find his own sound. In the company of these musicians, patiently observing and taking in as much as he could, Kashif began to form his own musical aesthetic.

Kashif’s poetic inclinations also grew and, in the 5th grade, he wrote and composed his first song. “I don’t understand how I wrote and composed that song,” he now says, “It was a romantic song. Someone writing a song like that in the 5th grade is quite funny, but it just happened.” If one were to ask Kashif, his talent and art seem to be a product of divine providence: “it just happened,” he says often — songs come to him, rhythms and melodies springing up in his head.

Precocious and full of aspirations, Kashif reached out Shehzad on Facebook in 2013, asking to record a song at Valley Beats Studio. Shehzad, having seen his video, knew the kid had talent that should be fostered and so Kashif was invited to the studio, making a 9-minute live recording with his teacher, Irfan. Shehzad was impressed with Kashif’s interest in music, his questions and desire to learn, and Kashif’s voice. It was Kashif’s aptitude for poetry, however, that blew Shehzad away. “When he recited his poetry to me, I couldn’t believe that this kid has written these lyrics,” Shehzad recalls, “I was shocked that he could write so maturely at such a young age. It convinced me that this kid is crazy about music and has the talent for it.”

Kashif’s aptitude for his artform won the support of many around him; support that was at first not shown at home. With the encouragement of friends, and his brothers – who realised the scope of his talent when they saw and heard him writing songs – his parents came around to the idea of him exploring music. In 2016, during a trip to Karachi, Kashif bought his first guitar with money that he had been saving up. For the three months that he was in the city, Kashif found every possible course on YouTube to teach himself about the instrument. By the time he returned to Hunza, he had developed a sound relationship with his guitar, which remains his primary instrument today.

In 2017, eager to explore the next step in his musical journey, Kashif sought out musicians to help him produce a song. When he was unable to find people willing to facilitate, Kashif decided to do what he had done all along — teach himself. He found a broken laptop left unused in a cousin’s home, and was granted ownership of it. The screen of the laptop was broken and its battery dead and it needed to be plugged in at all times. Electricity problems in Hunza meant that Kashif’s laptop often shut down when there was a power outage, and his unsaved work would go with it, causing him to start all over again. “But I never got tired of it,” he remembered, “I never got bored.”

Now living in Lahore, finishing his intermediate-level studies at Government College University, Kashif seems to draw music out of the air around himself. “When the world was created, so was music. Every voice is in a scale, everything around us in a time. Our lives run in a timing. Even the heart’s beating is in a specific time. The whole world is music to me.”

Watering fields one night in Hunza, he is struck by the beauty around him and words come to him. He takes out his phone, records the words, composes a tune for it on the guitar and makes a song out of it. In Lahore, on his way home one day, he is struck by children begging on the streets. He begins to write the lyrics in his head, goes home and puts them on paper, composing a whole song around them.

Sometimes, the music comes before the words, from somewhere inside him. “Sometimes, when I’m holding the guitar, and I pluck a chord, it evokes a feeling inside of me. Words come up with that feeling and, naturally, a composition is created,” he becomes more animated as he talks about his creative process. Where do these words and compositions come from? “It just happens,” he says.